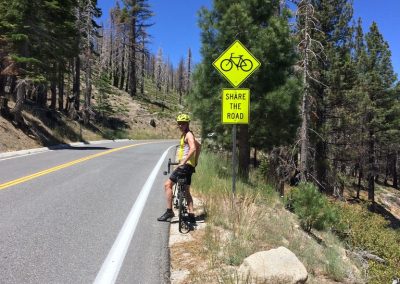 “Yes, but I’ve got a cousin in San Francisco”
“Well, at least we have a base at the beginning and end”
Little did we know when planning that we would really need that.

After we had booked the flights we discovered that our planned route down Highway 1 was impossible due a massive landslip about 150 miles south of San Francisco. So, plan B. Didn’t have one again, but it was in reality an opportunity to see more of California than just Highway 1 – and we did. We did Highway 1 (H1) south as far as we could, then Lake Tahoe (ok we drove up there) and Napa and Sonoma valleys. And we had invaluable help from my cousin as we shuttled back and forth up and down California. 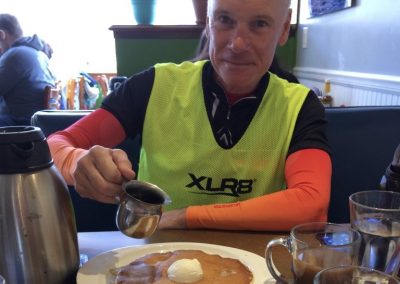 So after getting in the time zone and bike building we set off on a misty morning down Highway 1 – and it was chilly! That was Californian sea fret which was to be with us for the next few mornings. It was that first hour that made us realise that H1 was not going to easy – constantly up and down. We first hit the coast at Pacifica and a breakfast stop for our first short stack of pancakes. Yum.

We were gradually making our way to Monterey hugging the coast with breathtaking views around every bend. First night we stayed in a hostel at a lighthouse with a hot tub on the cliff edge under the stars. The next two stops were courtesy of Warmshowers (www.warmshowers.org) firstly with a tent in someone’s back yard and then to the very hospitable “Turtle” in Monterey. What a great guy and the epitome of the essence of Warmshowers.

The turning point on H1 was just north of the landslip at a motel on the banks of the Big Sur river and then back for 3 nights in Monterey – in a motel this time. We did see Turtle again one morning when we going out cycling, he was helping some homeless people (yes in mega rich Monterey) and he cycled 17 mile drive with us. You do meet some very genuine people along the road.

From Monterey it was back up H1 to my cousin’s place in San Francisco. Incidentally, he also arranged for us to stay the night with a friend about 40 miles south – another example of generosity. 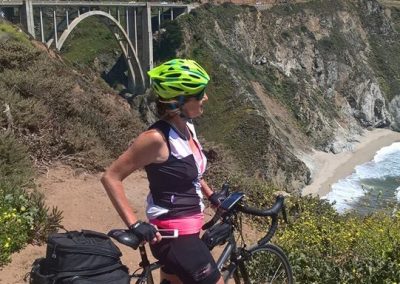 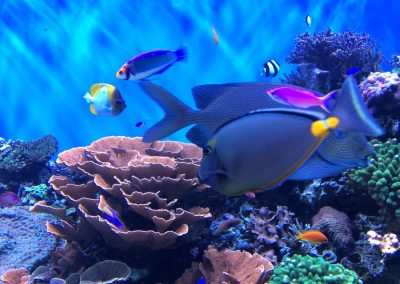 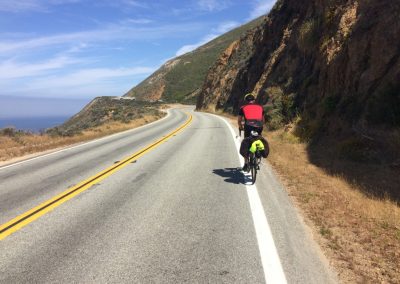 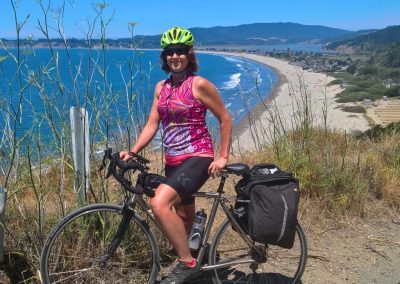 So, now onto phase 2 of our adventure. We had already booked a hire car (well a 4×4) and loaded the bikes in the back for the drive to Lake Tahoe. What a beautiful sight it was as we rounded the last bend to reveal the majesty of the lake nestling in natural bowl amongst hillside ski resorts. The lake itself is a 6000 feet above sea level.

Because the lake is so big we spent 3 nights in the north and 3 nights in the south. North probably better, more natural and less busy. The south where stayed was just over the Nevada state line so full of casinos and traffic. But both made for some great cycling especially on the cycle path around the north and west. Scary at times certainly on the busy narrow precipitous roads in the south of the lake. Always stunning scenery.

A word about cannabis and it’s legalising in California. It had been legalised 18 months before and being curious we found a shop/clinic in Incline Village in the north of Tahoe and did some shopping. Got back to the motel and basically lost an afternoon staring at the lake! Its powerful stuff and we ended up giving it to my cousin on the way back. The other thing is that, given that it’s legal, it was quite scary to be passed by a car with the aroma of cannabis wafting out of the car window! It’s a good job that the state law is to “share the road” and “give cyclists 3 feet”. 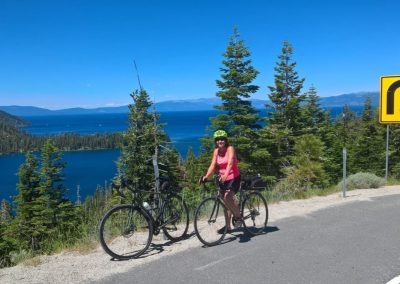 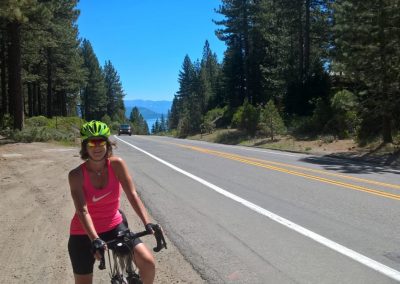 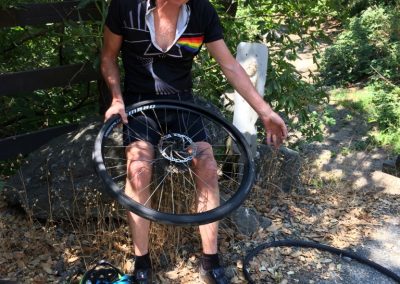 It can happen anywhere, anytime! 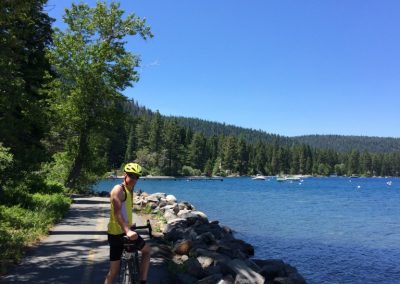 On the cycleway beside lake Tahoe

Back to San Francisco (and my cousin) and then off again on a ferry across the bay up to the Napa valley. We stayed in Napa for two nights at an Airbnb and witnessed a forest fire which turned the sky red – from 50 miles away.
Had a lovely day out with my cousin Michael and his wife Virginia at a winery of which he is a member. Starting wine tasting at c 11am followed by a liquid lunch which saw us glad it was a non cycling day!
Then headed north up the valley on minor roads and into Sonoma – in my opinion a more relaxed, less commercial and beautiful wine area with many small wineries (which we had to try) and stayed in a most wacky/hippy hotel called Isis Oasis in Geyserville. Has to be seen to be believed!
Then, as we left there a few days later, another one of those moments of kindness. We had cycled about 10 miles, pulled into a shopping mall where I discovered that I had lost/left behind my wallet. Panic! With all my luggage spread all over the car park a “senior” on a Harley asked if he could help. We explained (and I had phoned the hotel in the meantime) that I had left my wallet 10 miles back up he road. No problem he said, I’ll go and get my truck and give you a lift – and he did, there and back. What a great guy, and another one of those moments.
After staying on the Russian river we made it H1 again staying in Bodega Bay – where some of the Hitchcock film “The Birds” was filmed – never trusted those seagulls! From there it was back across the Golden Gate bridge into San Francisco again and, you guessed it, to my cousin’s. After cycling through rush hour San Francisco, had a slight problem finding the way and ended up in a dead end road with locals staring at us and muttering. 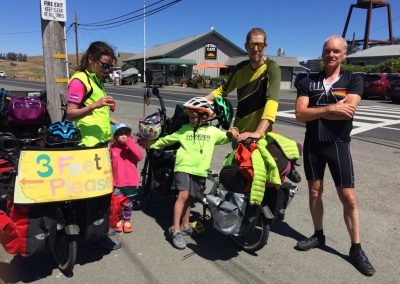 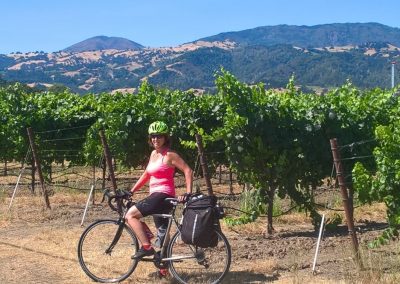 Vines in Napa – there’s a surprise! 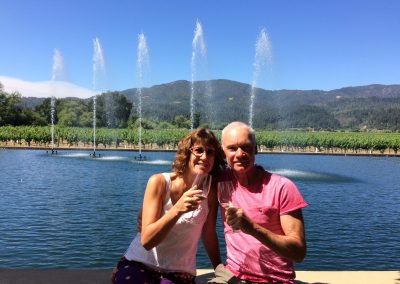 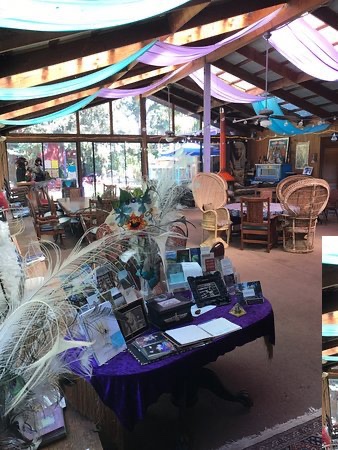 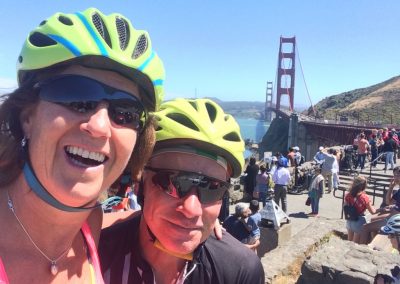 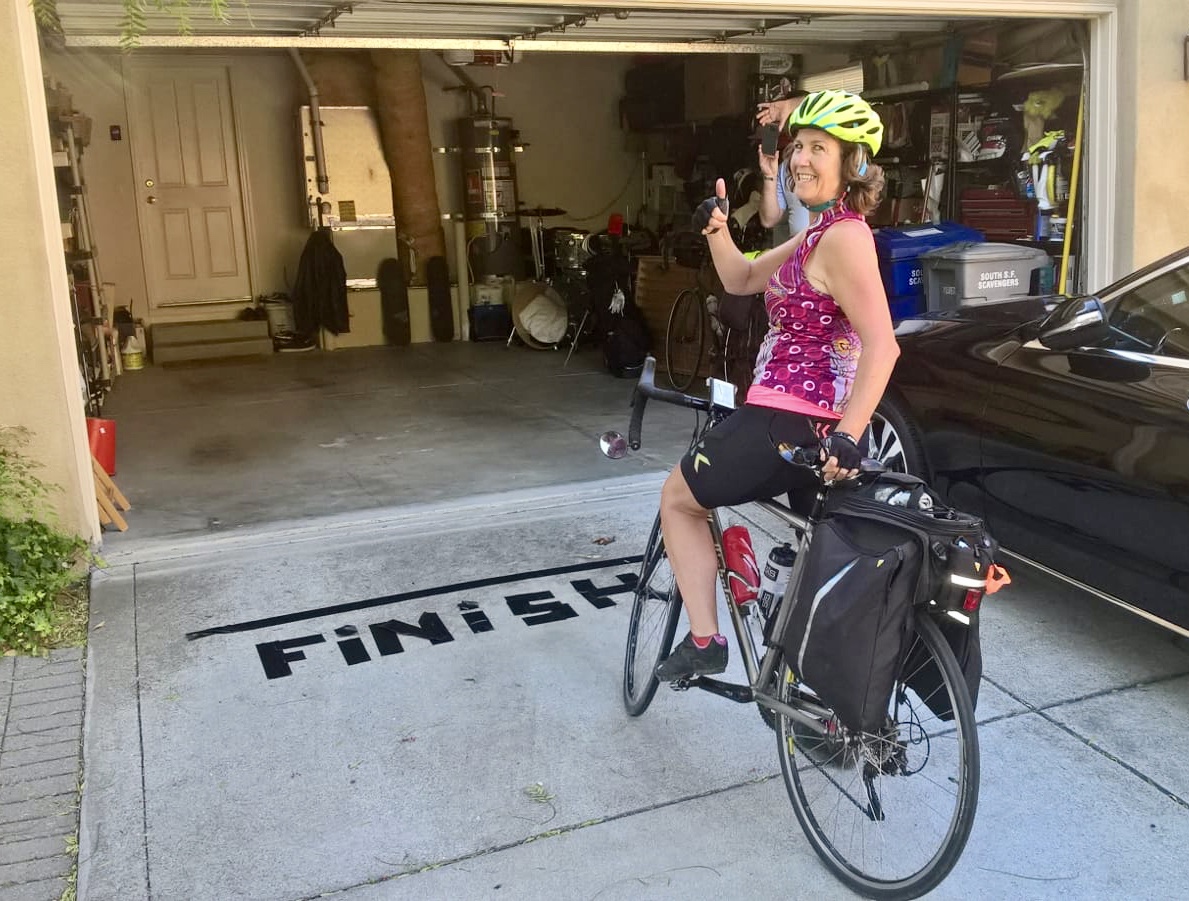 Hints and Tips
1. Always have a plan B. We were lucky to find out before leaving about the landslide, but it could have happened out there. You can’t plan for everything but going through some simple “what ifs” is useful.
2. Even if the weather report shows wall to wall sunshine, always take a light thermal. We had to buy some in San Francisco.
3. Check out apps like Warmshowers and Couchsurfing (www.couchsurfing.com) for free places to stay – and with like minded people.

4. If you are heading into the mountains take care with the altitude – yes its hilly, but anything above 6000 feet/2000m you can start to notice fatigue induced by the lessening oxygen.
5. California IS safe to cycle due to the “share the road” concept; but still take care it only takes one “vaping” motorist…
6. Don’t be afraid to ask for help. Most people’s intentions are honest and genuine.
7. Every city has its go/no go areas and very often they can be side by side – always be aware of changes to your surroundings; buildings, people, shops etc