Packing light on a bike 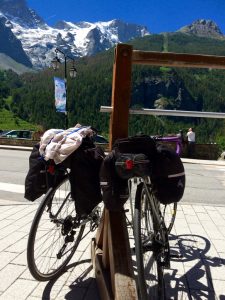 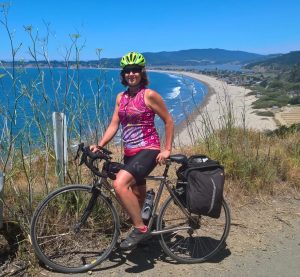 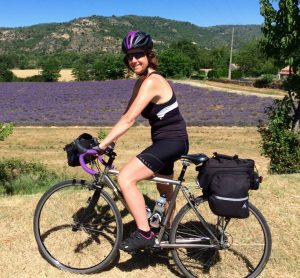 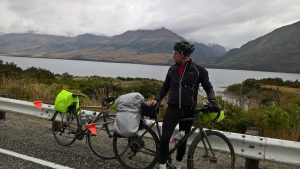 It’s called ‘credit card’ cycle touring. This means staying ‘under roofs’ in hostels, bed and breakfasts, hotels – or even sheep farms – we did that twice in New Zealand. I’m definitely NOT offering advice about the camping sort of touring when you are loaded up with a tent, sleeping bag and cooking stuff. All I know about that malarkey is that the more money you pay for your kit, the lighter it will be – and that’s VERY good thing for touring.

We’ve toured three summers in France, usually taking the Bike Express down. This is a bus that picks up passengers (other cyclists
so it’s great company), at various points off the M1. The bus has a trailer on the back for the bikes, and then drops people off down France, about 24 hours later. It’s such a great service and they serve you food too. We’ve also spent a month cycle touring in both California (safest place we’ve cycled) and New Zealand (definitely quite scary) too. To do this we organised all our places to stay before we traveled, yes it cuts down on spontaneity or dealing with emergencies (mechanical/human) but does mean you know you have a bed for the night. Very useful if the options are limited.

Honestly so easy to say, so much harder to do. I am an obsessive on this, literally weighing my clothes to decide what’s coming on the trip. You bring it, you carry it and weight on the bike is EVERYTHING! Basically you really don’t want to be carrying stuff you don’t actually need. I’ve just bought a sundress and I’m SO excited it’s half the weight of my current one – only 120 grams. Tick. It’s coming on the next adventure. Plus I love it! It’s all colourful and funky. Cycle touring is great for taking only your MOST FAB clothes. Relevant to the trip of course – no ball dresses, however fab they are.

I love that touring forces choices about what’s REALLY needed to come on the road, between essentials and nice to haves.

2. Padded cycling shorts – max 2 pairs. I did France one year with the SAME pair of shorts, my second pair started to rub, so got ditched. Yes it was hot so easy to wash out (usually while I’m in the shower). Then rolled up in a towel then hung up in the room.

4. Shampoo doubles up as clothes washing, which you will be doing often if you have decided to pack light.

5. Some make up? Mascara. OK . However you will stop wearing it by day 3 as you don’t have a mirror. And you are spending all day on the bike so it’s not like a beauty contest is it now?

6. Your favourite tee shirt or two yes plus ONE pair of shorts, leggings/ light trousers too.

7. A hoodie for both on and off the bike, a thermal, a waterproof, as it will rain, even in New Zealand when it’s supposed to be summer there! Some days my pack was soooo light as I was wearing EVERYTHING!!! Then at the end of the day I’d be back down to a vest – four seasons in a day they say, yep!

8. Go light on your feet too, some lightweight sandals and/ or trainers, as mostly you’ll be in your cycling shoes. It’s a personal choice, I still love to clip in but I’ve met many competent cycle tourers, usually half my age, cycling in mere flip flops. And going faster.

You need to really challenge what you take. There ARE shops if you need extras, my advice if you don’t think you need it then LEAVE IT OUT. But don’t be without what you love, if you read on the road then take a kindle.

A word about panniers.

Check the weight of them BEFORE you buy. Big isn’t better, they will weigh loads and you WILL fill them. They are not for us credit card tourers – leave them for the hardcore campers. I did New Zealand first time on a £30 Evans tiny back rack pannier, OK a little too small as you do need some spare space to take food on the road. What we now use is Topeak, still really good deal about £60, as seen in the photo – its two drop down panniers plus top bag, all together so it’s easy to lift off the bike..

There’s lots of new bike packing kit coming out all the time, aimed at off road and weekend bikers, it’s pricey though. My advice to work out what you REALLY need and then get the lightest carrying kit you can afford.